James Elmore spent the night in the bed of his El Camino. A mass of ladybugs had crept up his leg the night before as he finished the endless chores of his startup farm. He didn’t want to take the helpful bugs all the way to his house in Arlington.

Besides, all his chores—those endless, repetitive, and mind-numbingly boring chores—would be waiting for him the next day. The dandelion is a harsh mistress.

Farming dandelions requires daily sacrifices from Elmore, his wife Eleanor, and his nine children, who hope to someday turn their 153-acre plot of dandelions in Trafton into a thriving ranch that supports the family of eleven.

The Elmores took advantage of a federal program designed to help beginning farmers, called the startup farmer and rancher encouragement, enablement, and empowerment committee for the furthering of agricultural specialties, or the SFREEECFAS. As the first to sign up for the program, they received an $87,342.37 loan at a low interest rate.

In addition, Washington State’s Small Farms Special Education Program offers classes called Cultivating Awesome. Through county agencies, students such as the Elmores get a mix of hands-on, platonic, and spiritual education that includes apprenticeships under master gardeners such as legendary greats Ed Hume, Ciscoe Morris, and the lesser-known Butch “the orchid” Krakleton. 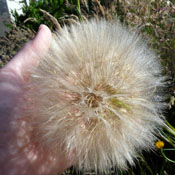 The loan and training will be a great help to the Elmore clan. Their organic farm is currently home to a dozen varieties of dandelion, which they harvest and sell for use in herbal remedies, teas, fabric manufacturing, and carpet deodorizer.

The Elmores plan to expand their operation to include more than thirty varieties by 2010. They are also in the stages of building a family home on the property, a 50-foot geodesic dome painted to resemble a late-stage sunflower bloom.

James has farming in his blood. He was born in the big city (Yakima) but grew up on a farm in nearby Naches. He came within two months of completing a double-major in business and women’s studies, but dropped out to take a part-time job at Sizzler so he could one day save enough money to buy a farm of his own.

“This is his dream,” Eleanor says with a wry smirk. But the excitement rubs off on Eleanor too, as she watches the seeds flutter through the air. “Sometimes it can be spirit-crushing challenge,” she says. “But it’s so beautiful it brings a tear to my eye.”

How To: Get Internet in Your Own Home

As the price of gas barely pauses at $4 on its way up to $10 a gallon and you find yourself spending $300 at the grocery store for little more than an organic grapefruit and a box of low sodium Wheat Thins, it is only by the grace of home equity withdrawals that so many of us have avoided bankruptcy this long.

It is getting harder and harder to make ends meet these days, let alone find the money to take advantage of all the latest great sales at our favorite stores. With the amazing savings of Independence Day sales and Christmas in July just around the corner, it’s time to start looking for ways to save some coin.

Thankfully, all you have to do is follow these practical money-saving steps based on the average Seattle-area budget, and you are guaranteed to save $7,777 in just four weeks.