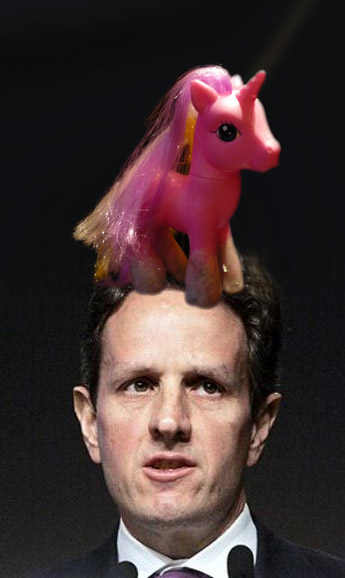 In response to the very utterance of the world’s favorite bureaucrat, stock prices surged in yet another record-setting rally—an undeniably positive sign that experts say signals an end to the economic crisis for the seventeenth time in the past six months.

“Whether or not we act swiftly and boldly, most experts now believe that we will lose millions of jobs next year,” said Obama, who is preparing to oversee a smooth transition in the nation’s economy from “panic crash” mode to “total desolation.”

According to Obama, no amount of money is too large for the federal government to throw into the beleaguered economy in a fruitless attempt to repair decades of societal credit addiction and reckless spending.

As a sign of his willingness to continue on the path of futile bailouts, Obama announced his pick for Treasury Secretary on Friday—Timothy Geithner, who oversaw the fruitless and colossally expensive bailouts of Bear Stearns, Lehman, and AIG as President of the NY Fed.

“The last thing we need right now is transparency in financial corporation balance sheets,” said Obama. “I’m confident that Mr. Geithner will continue to do everything in his power to pour as many trillions of dollars as we can into insolvent institutions across the nation and even the world.”

Obama offered scant details about the economic stimulus measure he wants from the new Congress, saying he will be consulting with his team of advisers to devise a plan that spends the maximum possible amount of money to achieve the least amount of accountability.

“The economy is likely to get worse before it gets better. I mean like, a lot worse. Like, knife fights in bread lines, families putting their toddlers to work 60 hour work weeks to pay the electric bill, dogs and cats living together… that sort of thing,” Obama said. At the same time, he coupled those sentiments with optimism. “I know we can work our way out of this crisis because we have done it before. It’s called the Great Depression. Look it up. Fun times.”

Vastly outnumbered House Republicans expressed hope that the new administration will listen to those who do not believe increasing government spending is the best way to put our economy back on track.

“Hah! That’s a good one,” said Obama. “Seriously though, I’m not really sure why those guys even plan to bother showing up in DC after January 20.”

Be the first to comment on "Obama Urges Congress to “Spend like there’s no tomorrow, because if you don’t, THERE MAY NOT BE A TOMORROW.”"

With accumulating project delays that have pushed back delivery dates for Boeing’s next-generation Dreamliner aircraft by nearly two years, some have begun to question whether the project will ever reach completion. Now, thanks to an exclusive Naked Loon investigative report, the truth has been revealed: The Dreamliner project is in reality nothing more than an elaborate farce.

For the past six months, three dozen Naked Loon reporters have been working under-cover in a variety of positions at Boeing, from the so-called factory floor to the upper levels of management. The startling truth uncovered by our investigative team is that Boeing has neither designed nor built any airplanes since the mid 1990s.

Over the past decade, Boeing has gone to great lengths to maintain the complex illusion that they are in fact still an actual aircraft manufacturer…

Trust Me on this One: Dolphins are Stupid

I feel I just have to address something gone terribly wrong in this world: Dolphins. Yes, you heard me right, dang it. I said dolphins. Yeah, I know, you think they’re cute. You think they are smart. That’s what you’ve been told. Told by the system. THE SYSTEM! DO YOU HEAR ME?! THEY ARE FORCE-FEEDING YOU THESE LIES!!

Yeah, they may LOOK cute, and their trainers may SAY they are smart, but they are not smart. Not at all. (Imagine an uppity nasal voice here) “Dolphins are easily as intelligent as man because they develop complex social relationships with other creatures and display learning skills higher than any other animal. Really humans could learn a lot from dolphins. They have the intelligence to aide them in living full happy lives, without the instinct to use their intelligence to prey on other creatures. We are indeed inferior.”

Today The Naked Loon is proud to introduce our very own advice column “Question the Kostyra,” in which Naked Loon Living Editor Martha Kostyra will answer your questions about life, relationships, and which espresso stand is most deserving of your valuable patronage.

If you have a question for Martha, just fill out our handy contact form to drop her a line. Today Martha dishes out her wisdom to a pair of distressed Seattle-area readers.