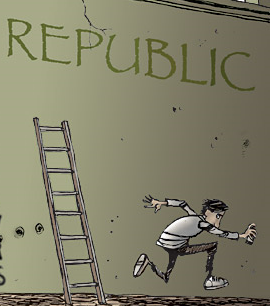 I usually try to avoid exposing myself to the predictable and unfunny graphical musings of SeattlePI.com “cartoonist” David Horsey, but I spotted something in today’s thumbnail on the SeattlePI.com front page that caught my eye.

Yes, that’s right. The P-I’s illustrious illustrator couldn’t even be bothered to hand-draw his own script for today’s “comic.” He went with Papyrus.

I wouldn’t have previously thought it possible, but I think my opinion of David Horsey just fell even further. Tsk.

Welcome to The Papyrus Virus!

How are We Affording Homes Around the Sound?

In addition to personally wrecking havoc with Washington State’s budget, Bush also signed orders that would force Boeing to begin laying off thousands of employees in 2009…

“This is probably the most disturbing crime I’ve had to deal with in my entire career,” said Sultan’s Interim Police Chief Rick Hawkins. “I don’t think I’ll ever be able to scrub the image from my brain.”

With accumulating project delays that have pushed back delivery dates for Boeing’s next-generation Dreamliner aircraft by nearly two years, some have begun to question whether the project will ever reach completion. Now, thanks to an exclusive Naked Loon investigative report, the truth has been revealed: The Dreamliner project is in reality nothing more than an elaborate farce.

For the past six months, three dozen Naked Loon reporters have been working under-cover in a variety of positions at Boeing, from the so-called factory floor to the upper levels of management. The startling truth uncovered by our investigative team is that Boeing has neither designed nor built any airplanes since the mid 1990s.

Over the past decade, Boeing has gone to great lengths to maintain the complex illusion that they are in fact still an actual aircraft manufacturer…