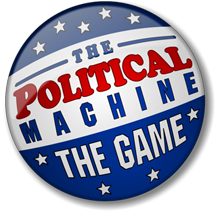 While many of us are thrilled that election day has finally come, bringing and end to the longest, most idiotic campaign cycle in history, I know one group of people that will be sad after today, regardless of the outcome. I’m referring to the fine folks at Stardock, maker of the PC game The Political Machine.

I can’t think of any other video game that has such a distinct and predictable point at which the value of the game goes from full price to zero. Granted, they’re still trying to sell it for $19.95 on the website, but I think that’s part of the joke. Already in the last week or so I have seen the game in the discount bin at Target for $10.

So fellow gamers, whether you’re a bleeding heart liberal or a right-wing wacko, let’s put aside our differences today and pour one for our homies at Stardock.

One week into their new lives as allegedly contributing members of society, recent local high school graduates are still riding an emotional high from completing the biggest achievement of their lives: meeting the criteria for graduation as defined in the Washington State law and school board policy.

“It’s like, so great to finally be like, done with school” said Sarah Donohue, a graduate of Inglemoor High in Kenmore.

Local teens reported feeling a lasting sense of accomplishment and satisfaction after successfully reaching the level of education required to obtain such illustrious jobs as cashier, car salesman, and food preparation worker.

On Monday, Gregoire viewed Safeco field by air and visited Mariners team stores in downtown Seattle and Bellevue to survey damage from this year’s record low number of team wins…

Have you ever stopped to think about what life would be like if there were no lighthouses in existence? No West Point Light Station at Discovery Park? No Admiralty Head Light? No Alki Point Light?

I didn’t think so, so here’s your chance to do so.

Done already? Well okay then. Your conclusion probably went along the lines of this: “I don’t want to think today. Also, you can’t tell me what to do.” Well if that’s the way it’s going to be, you leave me no choice but to straight up tell you what the world would be like if we didn’t have any lighthouses.

Imagine this. You are a captain of SS Blue Flamingo and are on a very important mission to deliver three tons of marijuana to the U.S. so that all the suffering cancer patients can toke up and forget they have cancer. Day turns to night, and you find yourself in the perilous waters of Dead Cows Corner…