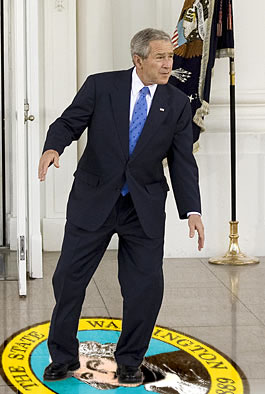 In addition to personally wrecking havoc with Washington State’s budget, Bush also signed orders that would force Boeing to begin laying off thousands of employees in 2009, as well as impose further shrinkage on revenues at Amazon.com, Starbucks, Nordstrom, and dozens of other local businesses.

State government officials were perplexed and saddened by Bush’s move.

“It’s really disappointing to me,” said Governor Christine Gregoire. “We have run the perfect model of a fiscally responsible government here in the great state of Washington, but for some reason George Bush seems to have it in for us, constantly ruining our state’s highly efficient, waste-free operations.”

The latest expansion of the projected deficit puts Gregoire in the unfortunate position of being forced to make painful cuts totaling over sixty percent of the $8 billion she increased state spending by during her first term.

“I just don’t know what we’re going to do,” said Gregoire. “No, really. I honestly have no idea. I’ve even set up a special form on my website at governor.wa.gov where hopefully someone that knows how to manage a budget this big will clue me in.”

A number of possible solutions are currently being discussed in Olympia to solve the historic budget crisis.

One plan would converting state government operations into a bank, thus qualifying Washington for a piece of sweet, sweet bailout billions pie. Another possible way out involves convening a special committee that would study the deficit and release a full report in 12 months, which would include detailed instructions on the direction of future committees.

“There is no need to worry,” said Gregoire. “When I came into office, I inherited a $2.2 billion deficit, which I solved by rapidly increasing state spending by $8 billion. I think maybe if we just increase spending another $16 or $32 billion, this problem will take care of itself.”

With Democrats retaining firm control of the state legislature and the governor’s mansion, Gregoire is confident that despite Bush’s best efforts, Washington State will continue to be the envy of the nation.

“Let’s not let thousands of layoffs and a measly five billion dollar budget shortage dampen our enthusiasm for spending,” said Gregoire. “If we do that, the Republicans win.”

As the stock market continues its historic plunge, one local musician is making literally tens of dollars on an original hit song: Wall Street Inferno.

Taking full advantage of the recent explosive popularity of hybrid vehicles, Honda has unveiled their latest breakthrough in automotive technology: the octabrid car.

“Continuing the tradition of innovation that we began with the Insight, Honda is proud to announce our exciting new car,” said a press release from Honda. “The new Honda Stan is powered by eight different fuel sources, making it four times better than the hybrids on the market today.”

In lieu of a traditional gas-powered engine, the Honda Stan is equipped with a cutting-edge drive system that converts eight sources of energy into motion…

When Judge Pechman’s ruling was revealed at 4:00 this afternoon…