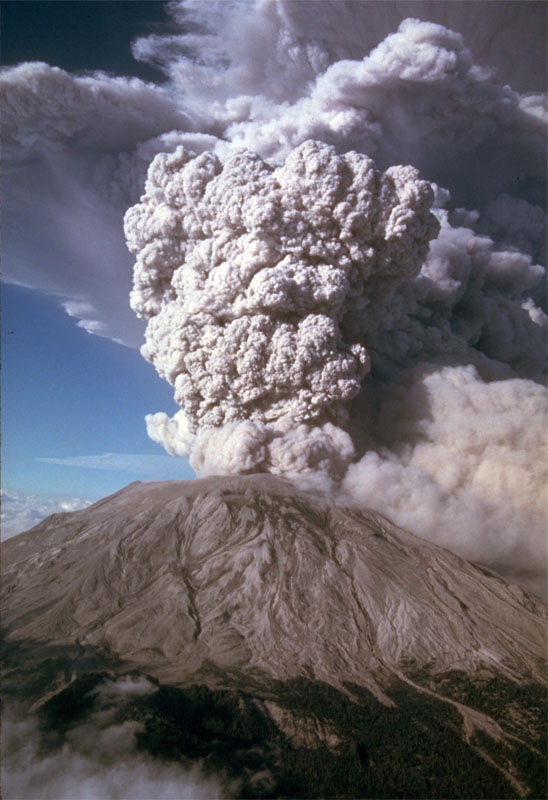 May 18, 2008—In a stunning display of journalistic sloth, 95% of news outlets across Western Washington headlined yesterday’s edition with yet another Mt. St. Helens eruption anniversary story.

Although nearly every possible angle on the 1980 event has been covered, re-covered, and then covered a few dozen more times for good measure, hundreds of news writers ignored the newsworthy events of the day and instead shamelessly spewed forth their own versions of the all-too-familiar tale.

Common rehashes of the anniversary story included so-called “dramatic” retellings of the events surrounding the eruption, interviews with witnesses and survivors, and collections of poetry and song written to the mountain.

“It’s nice to take a break from the daily grind of writing about new and unexpected events,” said a newspaper editor that asked not to be named.

A comprehensive study of the last 28 years of news reports indicated that a total of 347,863 stories covering the 1980 St. Helens eruption have been printed in Washington newspapers. 42% centered around sappy stories from survivors, 34% blathered on and on about all the ash, 17% retold the event from various allegedly original perspectives, while 7% were just thinly veiled attempts to sell St. Helens ash souvenirs.

In order to break the terrible cycle of unoriginal reporting on the issue, Puget Sound’s Most Spectacular Newspaper would like to take this opportunity to move this piece in an unexpected direction: openly mocking our nation’s dumbest state. Read on, and be enriched.

Washington State, 1980—Mt. St. Helens erupts in the most devastating volcanic eruption in the history of the United States. 57 people are killed. 200 homes, 47 bridges, and 185 miles of highway are all destroyed.

As a result, the entire region around the mountain was declared a national park. No homes allowed. No vacation lodges run by crazy old coots. Controlled access only. If the mountain ever threatens to pop again, there will be close to zero risk to human life and property.

Florida, EVERY SINGLE YEAR—Devastating hurricanes sweep through the state, winding a path of destruction of life and property. Over 140 people have been killed by hurricanes in Florida since 2000.

In the aftermath of the destruction wrought by these hurricanes, what does the state of Florida do? Why rebuild, of course. That way, in a few years when the next big hurricane comes through, it can all be threatened and destroyed yet again. And the circle of idiocy will be complete.

At least here in Washington we know how to take nature’s subtle hints.

For the past three months, Bellevue schools have been pioneering an exciting new student exchange program with school children in the immeasurably less fortunate village of Auburn, located in the poverty-stricken wastelands south of Seattle.

In the program, students from Bellevue schools endure a week living with a host family in Auburn while their counterparts are granted a temporary glimpse of life outside of the rural slums.

How To: Get Internet in Your Own Home

As you walk the happening streets of Ballard, you may occasionally overhear some trendy young people talking about something called “Internet.” Internet is like a kind of world-wide computer brain that knows everything. With Internet you can find the answer any question and satisfy any craving, no matter how base and repulsive it may be.

In order to get Internet, you first need to realize what Internet is, and just as importantly, what it is not. It’s not a big truck that you can just back up to your garage or something. You need technology to get Internet.

I am truly a despicable wretch.

In the wake of mounting public outrage following the imminent departure of the Seattle Sonics, I feel that there is something I need to say. I’d like to address an unlikely figure that has joined the rising chorus of my critics: me, Howard Schultz.

As I sit here enjoying a cup of coffee at Tully’s in Madison Park, I mull over the various things I’ve done that I myself would describe as ‘disgusting’, ‘despicable’ and ‘loathsome.’ “I really am one of the biggest jerks out there,” I mutter wistfully to myself.

When it comes to our area’s transportation problems, you hear a lot of talk these days about “compromise.” People say that transit advocates and road supporters should come together and find a middle ground that will benefit the entire community. You know what? Screw that. There, I said it.

I am tired of pretending that there are two sides to the so-called transportation “debate.” The simple fact of the matter is…