Naked Loon staff members scoured local grocers for alternatives to the cherished Circus Animal cookies and were able to find two—one produced by Keebler and one by Franz. 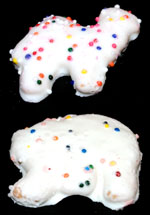 Keebler gets off to a pretty lousy start with a mouthful of a name. Seriously, “Animals Cookies Frosted”? That’s the best they could come up with? Yikes. Unfortunately, it’s downhill from there.

Color: Washed-out pink, and I don’t know how it’s possible, but even the white cookies look washed out. Apparently food coloring is a difficult science to master. Grade: D

Sprinkles: These poor “animals” are practically naked. You can count the sprinkles on some of the cookies on one hand. Seriously. It’s not as if you can spot little craters where the sprinkles just fell off, either. To call Keebler’s treatment of sprinkles negligent would be to gravely understate the matter. Grade: D

Shapes: The package appears to show an elephant, a sheep (?) and what I think might be a buffalo. The only animal the cookies themselves really resemble is an amoeba. Calling these formless blobs “animals” is an insult to the English language. Grade: F

Taste: The frosting has a weird almost slimy texture—am I eating an animal cookie here or licking algae off the inside of a neglected aquarium? It’s hard to tell with your eyes closed. The cookie portion itself is somewhat on the mushy side, and while the overall taste is “similar” to Mother’s Circus Animals in the most general sense of the word, I’d rather just stick with fond memories than insult my taste buds with this lousy mockery of a childhood favorite. Grade: C

Verdict: Giving these to your annoying neighbors would be a great passive-aggressive way of sending a clear “I don’t like you” message. Overall Grade: D 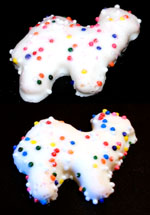 Now we’re getting somewhere. A nice simple name, recognizable shapes like the lion and the camel, and bonus points for throwing a monkey in there. Also note that the “zero grams trans fat” claim holds a prominent place on the packaging, much like Mother’s. Nice touch.

Color: Very similar to authentic Mother’s Circus Animals. Perhaps just ever so slightly oversaturated, but overall a very nice attempt to match the original. Grade: A-

Sprinkles: On average the Franz cookies sported as much or slightly more sprinkles than the Mother’s Circus Animals we pulled out of the package. Sprinkles were nicely distributed across the cookie, and seemed to hold nicely to the frosting. Grade: A

Shapes: While the shapes are not exactly the same as Mother’s Circus Animals, the folks at Franz have clearly made a strong effort to develop very close matches. Quality control on the shapes seems to be top notch. Grade: A

Taste: We were able to tell the difference between authentic Circus Animals and Franz Frosted Animals in a blind taste test, but the difference was very small. The frosting was appropriately solid and the cookie has the right amount of crunch. One of our testers reported a barely noticeable aftertaste. Grade: B+

Verdict: If we can’t have the real thing, Franz Frosted Animals are the next best option. Overall Grade: A-

8 Comments on "Learning to Cope Without Circus Animals"

When you think of the Seattle Aquarium, do you think of a bunch of white-jacketed scientists sitting around a pond, obsessing over algae counts or water quality? Well, that’s because you’re not very smart, because the aquarium isn’t anything like that at all.

As it turns out, staring slack-jawed at a bunch of fish for hour after hour is not nearly as boring as you might imagine. And that’s just the beginning of the exciting possibilities available to you when you visit the very best aquarium in the entire world, right here in Seattle.

As flood waters began to recede Thursday on the Snoqualmie and Tolt rivers in east King County, baffled scientists are attempting to understand the strange unpredictable phenomenon that caused hundreds of thousands of dollars in damage to area residents.

Dozens of homes, businesses, and roads were flooded this week in what scientists describe as “a bizarre and incredibly unlikely combination of events.”

What are you having for lunch today?