Housing
Here’s a simple solution to ease the pain of rising mortgage payments: just stop paying them! The foreclosure process takes something like three years, and many banks are simply unable to process the overwhelming tide of foreclosures on the books. Chances are they may just forget about you entirely.

If you’re renting, or the bank does finally kick you out of your worthless shack, there is no shortage of cardboard boxes out there to construct a fine abode out of. If you’re really resourceful, head over to south Seattle near the shipyards and pick yourself up an empty shipping container from China—instant home.

Transportation
Gas is still over three dollars a gallon, which is certainly more affordable than earlier this year, but that doesn’t really matter, since the dealer repossessed your cars two months ago anyway. Luckily for you, Seattle is the most bicycle-friendly city in the entire world, with many streets sporting ultra-wide six-inch shoulders just for cyclists. Even better is Seattle’s extensive network of dedicated bicycle paths, known as the Burke-Gilman Trail.

If you haven’t already got a bicycle, don’t worry. Thousands of people are offering to give away bicycles for free all throughout the city, you just have to know where to look for these great deals. Check folks’ back porches or climb up to their decks. If it isn’t locked up, that’s an indication that they want someone to take it off their hands, they just haven’t made the time to put up a Craigslist post yet. 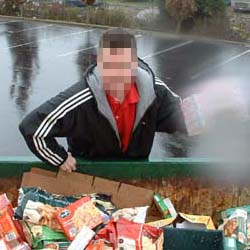 Food
Here’s a fun fact: the average grocery store throws out enough perfectly good food every day to feed a family of five for ten years. Dumpster diving for baked goods is not only a great way to get free food, but it’s also a fun activity that the whole family can join in on.

At restaurants there is always the ethically questionable dine and dash, but we prefer the more principled vulture method. Just grab a table, stall the waiter as long as possible, and pick the leftovers off of recently vacated tables. Or, for the price of a Costco membership (less than $0.14 a day), you can enjoy a lavish lunch buffet nearly every day.

Entertainment
Try this: go swimming in a duck pond until you get swimmers itch, then scratch the itch to experience waves of pleasure beyond your wildest imaginings. The best things in life can’t be bought.

Don’t let the squalor and desolation of today’s economic wasteland get you down. Get out there and enjoy life no matter how deep an abyss of debt you have dug yourself into.

Putting Laziness to Work for You

Laziness: it’s not just for sitting around the house anymore. Here in America, the land of such groundbreaking inventions as the recliner and the the diet pill, we have become the world leader in laziness. But how can you make laziness work for you?

The personal benefits of laziness are limitless, but for now let’s limit our focus to one area… say, parking lots.

As a resident of the greater Seattle area, you know that there is no better place on Earth than the perfect paradise we live in here in the Puget Sound.

While traveling outside of our green and blue utopia is a decidedly bizarre and unnatural course of action, it is understandable that you might sometimes find yourself wondering what life is like for the unprivileged masses that are doomed to live in the less desirable 99.99% of the planet.

Thankfully for you, The Naked Loon is rushing to your aid yet again, going places you don’t want to go and coming back to bring you all the disturbing details. This month’s punishing journey takes our roving reporter 2,500 miles away, clear over to the shriveled husk of an allegedly-once-great city: Boston, Massachusetts.