The location of the future streetcar station on Harrison is currently home to a fast food restaurant and an independent coffee shop. 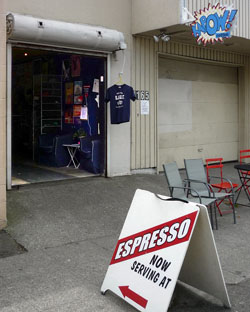 “It’s a real shame that we have to displace local businesses like this,” said Allen’s statement, “but you can’t create a new and vibrant neighborhood here without bulldozing at least a few of these eyesores.”

The demolition of 1165 Harrison means that locals with a hankering for fish tacos will be forced to walk over three blocks to the next-nearest Taco Del Mar.

It also coincidentally eliminates Kapow! Coffee, the coffee shop made famous by their promotion of the S.L.U.T. acronym for the existing streetcar and their proposal to build a 300-foot bronze statue of Paul Allen.

“Oh, is that what’s there right now,” said Allen when we called for a comment about the closure of Kapow! Coffee. “I had no idea that building this new streetcar would mean eliminating those… people.”

“If Allen strikes us down, we shall become more powerful than he could possibly imagine,” said Baker. “Also, we plan to relocate to the Giant Paul’s big toe once the statue is completed anyway, so leaving this location is really no big deal.”

The City Council will hold a special session on Friday to rubber-stamp Allen’s proposal. Once the permits are issued, demolition of 1165 Harrison is expected to begin within a week. Vulcan will then crush the building with one swift stroke.

3 Comments on "Paul Allen Announces “Because I Can” Streetcar Line"

With the future looking bleaker by the day in the face of unprecedented economic meltdown, tens of thousands of people across the country are turning to sterilization to help them cope with the disaster.

Clinics in virtually every city in America have been flooded with requests for sterilization from middle-age professionals, teens barely out of puberty, and everyone in between. Without exception, those receiving the procedures have cited the country’s dismal, expensive future as explanation.

On Monday, Gregoire viewed Safeco field by air and visited Mariners team stores in downtown Seattle and Bellevue to survey damage from this year’s record low number of team wins…