In an insipid turn of events this weekend of interest only to die-hard political junkies, hopeless Democratic presidential candidate Hilary Clinton issued an empty challenge to the soon-to-be-nominee Barak Obama: that they face off in a moderator-free debate.

In the bizarre attempt to stave off her inevitable electoral elimination, Clinton invoked the memory of Abraham Lincoln; the most famous Republican president of all time. “Lincoln and Douglass debated without moderators,” she said, “so I just have to wonder: is Barak Obama too much of a coward to debate me without his pals in the press sending him softball questions?”

Political pundits believe that Clinton’s challenge is motivated by a paranoid belief that the moderators of previous debates have somehow been “in cahoots” with Obama, having fed him the questions beforehand. “You can’t tell me you didn’t notice that he was reading from a teleprompter at the last debate,” Clinton said. “I double-dog-dare him to face me in an unscripted debate.”

Obama seemed unfazed by the increasingly extreme provocations from the broken shell of the former front-runner.

“Are you kidding me?” said Obama on Saturday. “I can’t believe that chick hasn’t dropped out of the race yet—what a joke.”

He stated in no uncertain terms that he will not be accepting the so-called challenge. “I have resolved to no longer waste any of my valuable time—time that could be spent whispering sweet nothings in the ears of the American public—pretending that this has-been is an actual competitor,” said Obama.

Upon hearing of Obama’s rejection, Clinton became visibly agitated. “This was supposed to be my year—MY YEAR,” she said. “Where does he get off, sweeping in with his fresh young face, optimistic outlook, and hope-filled rhetoric? Yet again, the vast right-wing conspiracy is out to get me.”

Meanwhile, Obama continues to beam with confidence as sunshine and rainbows follow wherever he treads. He intends to continue his mission to spread peace and happiness across the land, whisked by hopes and dreams into office as the leader of the free world.

“Debates are such negative things,” Obama said. “I want to run a campaign of hope, and honestly I just don’t see how arguing about trivial things like ‘policy’ or ‘character’ fits into that mission.”

“Sunshine and lollipops, pretty pink ponies, happy times for everyone,” Obama said. “Yes we can.”

According to a statement released today by Christine Gregoire’s campaign, a $50 million yacht and $5.4 million mansion given to her by the state’s Indian tribes do not constitute a conflict of interest, and anyone that suggests they do is racist, and probably also sexist.

While recent headlines have been focused on over $650,000 in contributions to Gregoire’s campaign from the tribes, the personal gifts of the yacht and mansion were not previously public knowledge.

“This is a preemptive strike against all the hateful bigots out there that simply do not understand the normal and natural flow of politics,” said Debra Carnes, Gregoire’s campaign communication director.

Specifically, speeding was found to save the average American roughly two minutes every day. This number was determined by analyzing vast amounts of data and performing deeply complicated calculations—it definitely was not pulled out of thin air. 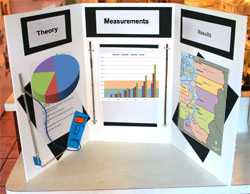