As construction crews began gutting the Denny’s building in Kenmore this week to prepare for a massive remodel of the 31-year-old structure, thousands of passing motorists and local residents remained completely oblivious to the project.

Located on a busy stretch of Bothell Way (Hwy 522) through Kenmore, the forgettable building was the subject of a widespread lack of interest in June after its sexier, more popular cousin in Ballard was demolished.

Not a single person could be found Wednesday that cared or even noticed the major demolition project at the site. No one noticed that the nondescript building had been stripped of its clay tile roof with rustic peeling green paint. Nobody cared that its classy painted white brick facades had been unceremoniously toppled.

Kenmore residents and area employees continued to express a deep and heartfelt apathy regarding the fate of the structure as its interior and exterior walls were ripped completely out this week.

“Oh, they’re tearing up the Denny’s? I hadn’t even really noticed,” said Clyde Larson, an employee at Parker Paint, located directly next door to the site. 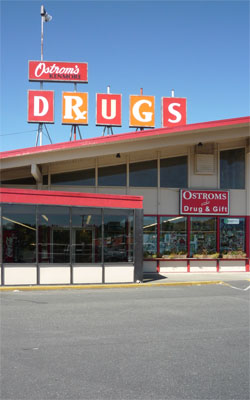 “Huh,” responded Kenmore Mayor David Baker, when told the news. “Will this get my name in the paper?”

Extensive research revealed that in late 2007 the Kenmore Denny’s did appear on a list of prime examples of Ranch-style architecture, but it was later determined that the Philadelphia-based historian that compiled the list had mistakenly confused Kenmore, Washington with the Kenmore ward in Akron, Ohio.

The gutting of the unremarkable four-thousand square-foot structure is the first step toward a major remodeling project that will make way for the impending move of Ostrom’s Drugs.

The cherished institution is being shuffled out of its 45-year home in the heart of Kenmore and moved to the long-neglected Denny’s site.

Once Ostrom’s has been cast to the Kenmore hinterlands, the city will finally be able to break ground on building its younger, flashier downtown, a project that has been in the planning stages since the city incorporated nearly ten years ago with an endearing but futile vision of becoming the next Kirkland.

Indifference toward the vicious molestation of the Kenmore Denny’s is expected to continue well into 2009, when the perpetually-ignored building will allegedly re-open with 2,600 extra square feet and a new tenant.

For many Seattle-area residents, the only thing more depressing than the thought of Californian immigration to Washington is organized sports.

The Mariners are floundering at the bottom of the MLB heap, and have never even been to the World Series. The Seahawks lost their one shot at the Super Bowl to a bunch of guys in striped shirts. Rumor has it that the Sonics won the NBA Championship once, but now that the NBA has skipped town, Seattle’s only remaining sports team to have won a national title is the Seattle Storm, our WNBA team. Unfortunately, there are only approximately three people in all of Seattle that care about the WNBA, and this includes the team, their families, and their friends.

In spite of all this, there is still hope for sports fans in the Puget Sound. We need not stoop so low as to feign interest in women’s basketball in order to enjoy the glory of having a winning team. No, we must simply turn our attention to Seattle’s most overlooked and—more importantly—our winningest sport: WhirlyBall.