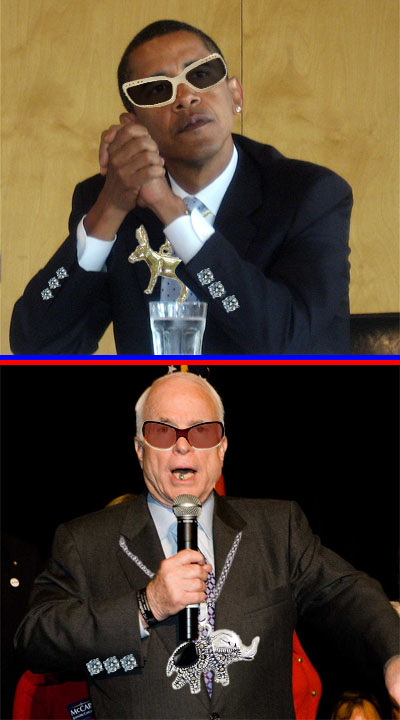 “How can someone with an annual income in the top 0.1 percent possibly be in touch with the average American,” said Obama at a recent rally. “If you’re like me and you’ve got an income no higher than the top 0.3 or 0.2 percent, you might have a different perspective than John McCain.”

The McCain camp was quick to point out that Obama is not exactly part of the proletariat, either.

“Barak Obama made more than $4 million last year,” said McCain in a TV ad that began airing this week. “Four. Million. Dollars. I don’t remember how much I made last year, but I’m pretty sure it wasn’t four million dollars. I think.”

According to a recent poll, the issue of which candidate is more wealthy is the number three issue on the minds of likely November voters, coming in just behind flag lapel pins and the candidates’ ability to spin a convincing lie.

For some voters, riches can be relative.

“McCain owns six or seven houses, right? So that means he’s losing even more money than most people with this housing bust,” said Tom Eaton, whose Sacramento-area home is in the final stages of foreclosure. “So in a way, I think John McCain actually can relate to me better.”

Trying to determine which super-wealthy candidate is more in touch with the average American’s money concerns in these difficult economic times has proven too difficult for some.

“I don’t know,” said George Smith, a factory worker from Cleveland, Ohio, “I think maybe I’ll just vote for my buddy Steve. Now there’s a guy that I can relate to.”

What Are We Afraid Of?

You know what I hate? I hate being wrong! Wait, did I say wrong? Scratch that, I am never wrong.

I just hate it when someone confronts me and tries to get me to back up my views with so-called logic and reason. Listen, people—I do not base my beliefs on actual “logical thought” or “rational thinking,” okay? Do I look like some sort of college professor or something? Sheesh.

I do not so much use reason to come to my beliefs, as raw emotion…

BEIJING – While fraudulent footprint fireworks and little lip-syncing Lin appeared to be the extent of China’s Olympic deception, in reality these scandals are just the icing on an enormous Olympic fakery cake. According to well-placed sources in the Chinese government, the entirety of the Beijing Olympic Games is in fact completely staged.

Every single aspect of the 2008 Summer Games as viewed by the world on television and the Internet has been part of an elaborate farce, carried out through a combination of green-screen digital trickery and fully computer-generated graphics.

Even Beijing’s famous “crow’s nest” stadium exists only as an arrangement of bits inside a massive graphic-manipulation supercomputer.

Emboldened by the swift passage of his $700 billion Emergency Economic Stabilization Act, Treasury Secretary Henry Paulson went before Congress on Monday to introduce a series of sweeping new bills that, when passed, will effectively declare Paulson to be the ultimate ruler of the universe for all time.

“I didn’t really think I could do it,” said Paulson, referring to the rapid passage of the $700 billion Wall Street bailout…